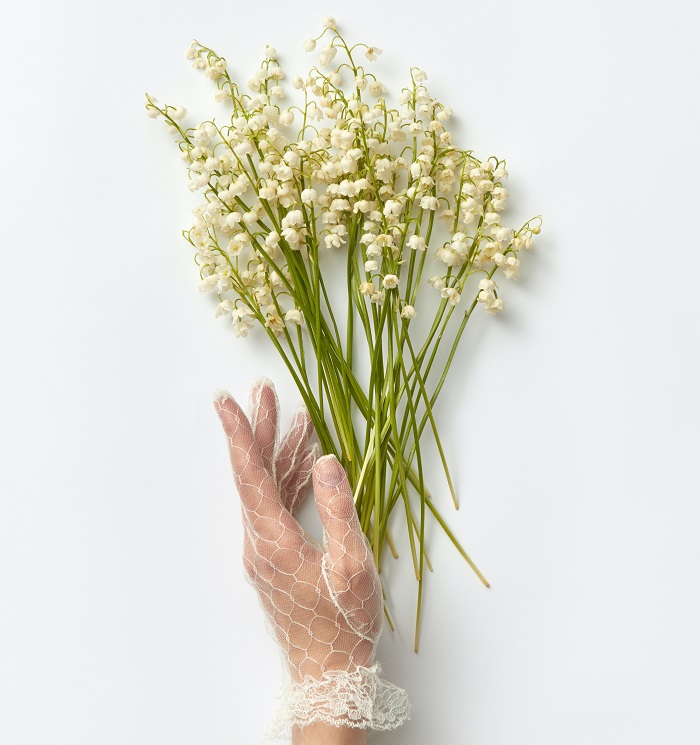 Many people know about the existence of a flower horoscope, because not only planets, and gems but also flowers may patronize.

Attentive druids and celts were especially interested in observing this connection between months and days of birth so even created a floral horoscope based on their observations.

A person born is on a certain day and a month connect to one of the beautiful flowers, so the birth month flowers may tell a lot about you and your close people.

Previously, we have already described all birthday flowers in this article, so today let’s find out more about the May birth flower or even a May “bouquet” according to the flower horoscope.

The bouquet of May birth flowers consists of:

May Birth Flowers Lily of the Valley

The fragile “porcelain” bloom of the Lily of the Valley, with a delicate cool aroma, is well known. But not all people know that their red berries are quite poisonous, as well as all other parts of this plant.

People born on May 1-10 are under the auspices of Lily of the Valley. They are sensitive, modest, and trusting. But their trust is not naivety, they have sympathy for people, and are confident in the good intentions of the surrounding people.

Excessive gullibility is harmful to these people, but given that they are smart, their trust does not lead to “disasters”.

“Lily of the Valley” is not too much ambitious, moreover, they understand that not in every area they can succeed. People of this birth flower are usually content with a very modest position, and willingly help colleagues. They do not want to compete with other people.

These “flowers” can improve the level of professionalism for their self-affirmation, but for sure not for dominance over others.

As a rule, “Lily of the Valley” make a couple with a person who is ready to take care of them. In turn, they are ready to take care of the weaker people, easily deal with children, and do not get tired of helping older relatives. Even small money will be enough for them to create comfort in the house, and to provide loved ones with a comfortable life.

The “Lily of the Valley” rarely thinks about themselves, and those around them sometimes abuse their care.

Famous people born under the influence of the Lily of the Valley flowers:

Karl IX on May 1, 1561, introduced the tradition of giving Lilies of the Valley. The king believed that these flowers bring good luck and change for the better, so he presented flowers to every lady in the palace. This rite was so loved in France that since then this day every year men may give ladies beautiful white flower Lilies of the Valley!

The famous Christian Dior considered the Lily of the Valley as his talisman. He loved to insert a twig of the valley in his buttonhole. This flower became the star of Dior’s spring-summer collection in 1954, and two years later the aroma of the valley was used in Diorissimo perfume.

In the state symbols of many countries and cities, there is an image of this cute flower – in Holland, Norway, Sweden, Germany, and Finland the Lily of the Valley even became a national flower!

Legends About the Lily of the Valley Flowers

The Irish legend says that small blooms of the Lily of the Valley are steps for fairies and elves. Using these steps, magical creatures rise from the ground to the reed, collect its thinnest fibers and weave a soft cradle for themselves.

The ancient Greek legend says that this flower is tied to the goddess of hunting Diana.

During the hunt, the Favans wanted to catch the goddess. They followed her for a long time, but she saw them and got rushed to run, and drops of sweat scattered from her heated face and body. And where the drops touched the earth, the Lilies of the Valley grew.”

Description of the Lily of the Valley Plants

The Lily of the Valley called “Convallaria Majalis” belong to grassy plants.

The color of the bell-shaped flowers could be either white or white-pink.

These plants could be found in forests. This flower seems so gentle and defenseless, although it is a very strong flower that is easily taken root, multiplies rapidly, and even captures the territory for its reproduction.

Purslane is a birth flower for those who were born on May 11-20.

Purslane can decorate the gardens with its bloom. This plant can be a dish or seasoning. Also, its extract can be used in medications.

People who were born during this period are very different, but they have one general quality – patience.

Such people perceive their problems as an integral part of life or punishment for fictional sins.

If “Purslanes” do not pay attention to their grievances, then patience and hard work will help them achieve many goals.

These people love to carefully explain and describe everything. Such attention to detail helps them be good specialists in their work, although a brilliant career happens extremely rarely.

If the representative of this flower manages to get rid of the mix of suspicion and resentment, then in their personal life everything will be just fine!

Famous People Born Under the Influence of Purslane:

Purslane contains vitamins and minerals that increase the overall state of health.

This plant may live for 25 years.

Its leaves have a pleasant taste of lemon and a crispy texture. Thus, you can replace spinach and add it to various recipes.

The plant was used for food and medicinal purposes in ancient Greece and Rome. Hippocrates used it as an ingredient in many drugs. Arabs in ancient times called this flower “blessed.”

Description of the Purslane Flower

Purslane plant (lat. Portulaca) – growing in the tropical regions of the northern hemisphere and, according to various sources, from one hundred to two hundred varieties.

The flower prefers to grow in a wet sandy place along the coast of rivers and ponds, it grows in fields, and gardens near housing. The popularity of a flower in Europe came in the Middle Ages, the British especially liked it as a garden plant. In garden culture, only one species is grown – Portulaca Grandiflora.

Purslane is a magnificent container plant, it can be placed in street vases, pots, suspended baskets, balconies, and window boxes.

Maybe Chamomile is not the queen of flowers but the people with this flower symbol are charming and smart, and it means more than just beauty!

Representatives of this floral sign easily captivate people and can use them for their purposes. “Chamomiles” are practical, they will never spend excess, and they are not peculiar to wastefulness. People of this sign know how to benefit everywhere, while not thinking about whether they are correct about other people.

The degree of destruction of their life or, conversely, the achievement of good goals depends on the degree of awareness of “Chamomiles”.

Oh, these people are not easy! They strive not just to the heights, but they want to reach the stars!

Famous People Born Under the Influence of Chamomile

Chamomile is one of the most popular plants used for medicinal purposes. This white flower is cultivated in many countries. Chamomile raw materials are very highly valued for their antiseptic, anti-inflammatory, and other properties.

In the cosmetic industry, this flower is also popular, chamomile extract is part of many skin creams. Regular hair rinsing with chamomile infusion gives hair a beautiful golden hue.

Description of the Chamomile Flower

The Chamomile plant (lat. Matricaria) is a genus of grassy flowering perennials, combining about twenty species of flowering in the first year after planting.

Chamomiles grow in Eurasia, America, South Africa, and Australia. It is curious, that chamomile grew in Central Africa but was destroyed by local tribes because they allegedly attract evil spirits.

The most famous kind of white flower is pharmacy chamomile, which has long been widely used for cosmetic and therapeutic purposes.

Thanks to the magic power, he became rich and eventually forgot his fairy. And she suffered and cried every day in anticipation of the shepherd.

With every tear, she became less and less until she disappeared. And where the lady’s tears fell, chamomile grew up and covered the entire forest meadow.

And the shepherd with each fallen tear lost the strength of the healer until he lost it at all. Then he remembered his beloved and went to the magic forest. But only silence and thousands of flowers met him there.